Squeeze Rock (the notorious Accordion power trio led by Julz-A) is collaborating on many new projects.  Sign our email list to keep up with all the developments! 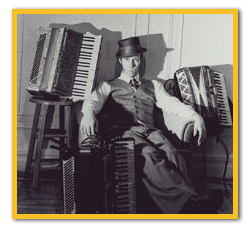 “Fingers fanned out at chest level, terry-cloth band on his wrist, leaning back slightly, [Julz A] strikes a classic rapper’s pose despite playing an instrument that has been relegated to Dorkville at least since the Beatles.”

“Julz-A might best be characterized as a fringe artist who seamlessly combines his musical prowess with showmanship and an offbeat sense of humor…he has somehow taken my preconceived notions and scattered them to the wind.”

Squeeze Rock is the name and genre tag for the musical styles of Julian “Julz-A” Hintz. Squeeze Rock is an Accordion alternative; Julz-A sings and raps while playing the Squeeze Box.  Having twice brought legendary Apollo Theater audiences to their feet on national TV alongside Whoopi, Chingy and Ray Chew — first on Showtime at the Apollo and again on Amateur Night at the Apollo — The sound can be compared to such rapping artists as Beck, Outkast, Primus, and Rage Against The Machine.