WEIRD AL WAS A PUSSY

Seven Days
WEIRD AL WAS A PUSSY
By Dan Bolles 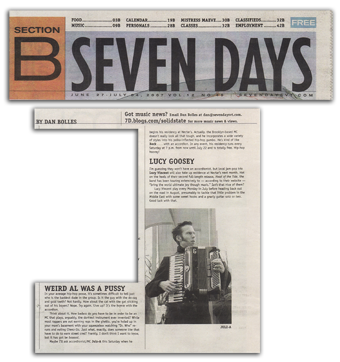 In your average hip-hop posse, it’s sometimes difficult to tell just who is the baddest dude in the group. Is it the guy with the do-rag and gold teeth? Not hardly. How about the cat with the gat sticking out of his boxers? Nope. Try again. Give up? It’s the homie with the accordion.

Think about it.  How badass do you have to be in order to be an MC that plays, arguably, the dorkiest instrument ever invented?  While most rappers are out earning reps in the ghetto, you’re holed up in your mom’s basement with your squeezebox watching “Dr. Who” re-runs and eating Cheez-Its.  Just what, exactly, does someone like that have to do to earn street cred?  Frankly, I don’t think I want to know, but it has got [to] be baaaad.

Maybe I’ll ask accordionist/MC Julz-A this Saturday when he begins is residency at Nectar’s.  Actually, the Brooklyn-based MC doesn’t really look all that tough, and he incorporates a wide variety of styles into his polka-inflected hip-hop gumbo.  He’s kind of like Beck … with an accordion.  In any event, his residency runs every Saturday at 7 p.m. from now until July 22 and is totally free.  Hip-hop hooray!